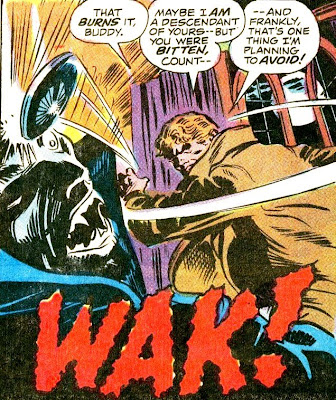 Gene Colan's TOMB OF DRACULA ish 1 stylings. I can think of no more appropriate fight song than "Vampiro!" by Satan's Pilgrims!
http://www.youtube.com/watch?v=BhUzn9kfIlQ
http://www.spacebooger.com/ adds the production values necessary for a SMASH hit!
Posted by Chad Carter at 1:29 PM 4 comments: 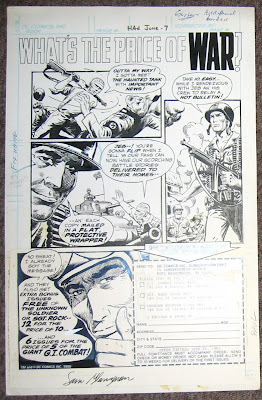 Well, not really. I'm not made to have fun.


I was wondering about the characters I'd like to see in a "Saturday Morning Cartoon" context...I mean, Saturday mornings as we kids from the 1970s remember them, instead of how they actually were. Saturday mornings and cartoons, well, that was damn near Christmas throughout the year. I mean, Christmas without the inevitable post-present opening mother backlash with her screaming at you to get dressed to go to the family Christmas dinner, and calling you ungrateful and selfish because you're an only child who just wants to play with his toys. No, Saturday mornings didn't have that part, but the excitement...that they had.

So, here's some stuff I wish had been on Saturday Morning Cartoons: 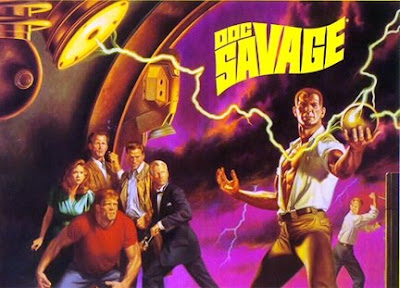 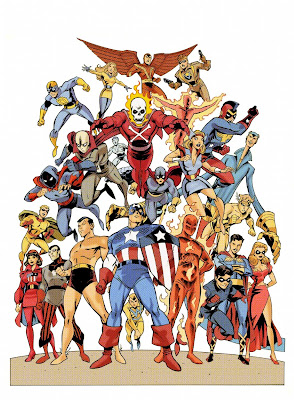 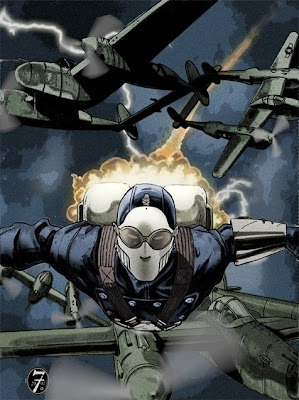 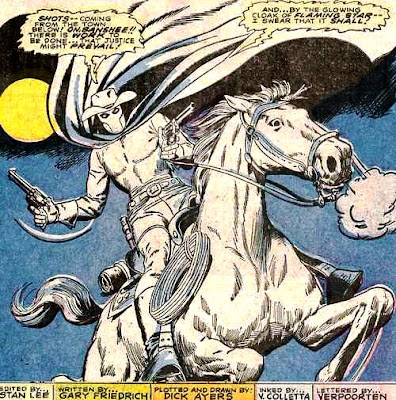 
All by Hanna Barbara, of course. 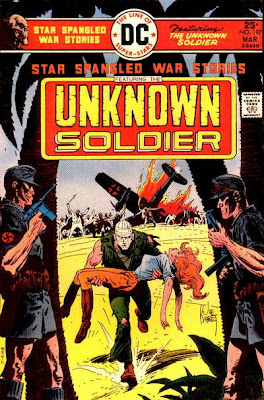 An Arab in collusion with the Nazis named Hassan Ben Haroun is captured by covert guerrillas at an airfield. The rebels are led by a white woman. Hassan is actually the Unknown Soldier in disguise, who has been sent to North Africa to take Hassan's place and sabotage the Nazis last line of defense in the desert: a set of three Henschel HS 129 experimental bombers. Without these bombers, Rommel and the Afrika Korps will be defeated and the desert war won.


However, the unknown white rebel with the Arabs is determined to take Hassan back to face justice. The Soldier manages to escape by alerting the Nazi guards, but the white woman, still believing him to be Hassan, tracks him for the kill. The Soldier, meanwhile, recalls more information regarding his primary orders, preventing him from killing the white woman.


Back at Allied HQ, the Soldier was introduced to a Senator Evans, a brusque, entitled man whose daughter Jeannie is the white woman leading the guerrillas. Being a woman, Jeannie has a need to join the war effort, and has fled her father's political world for something real. Senator Evans has assurances from the Soldier's superiors that the Soldier will find and return Jeannie to the States. Obviously disgusted by such pandering and the Senator's short-sightedness (as the Soldier points out: "Seems I do remember rumors concerning a white woman leading a band of guerrillas. Only from what I heard, she's doing an excellent job.") the Soldier will perform his duty.

Back in the present, the Soldier as Hassan is about to be executed by Jeannie Evans, and he turns the tables on her, still disgusted by his orders, and renders her unconscious. Taking Jeannie to one of the Herschels, the Soldier fires up the bomber and flies from the airfield. The other two Herschels take off in pursuit, but they are ill-prepared for the Soldier's dive-bombing of the airfield, using the mounted 75mm anti-tank gun to destroy the other planes.

After that, the Soldier flies the limping Herschel several miles before it crashes in the desert and itself is destroyed. The Soldier carries the still-unconscious Jeannie Evans from the wreckage. Soon he discovers she is dead, however.

The story ends on the Soldier's righteous anger at the Senator, and his lament that he would not be able to forget Jeannie's face, "in restless dreams."

It's interesting that writer David Michelinie never explicitly states whether Jeannie has been killed by the bullets of the Nazi soldiers during the escape, or more darkly whether his own blow to Jeannie's head to knock her out might have killed her.

I didn't catch this subtle hint the first time around. Though obviously easy enough to suspect Jeannie was collateral damage during the Soldier's mission, still the Soldier's deep regret seems especially poignant...and I wonder. Was the Soldier's blow the moment Jeannie Evans died? Either way, the Soldier holds himself and a selfish bureaucrat responsible for the loss of a spirited fighter with integrity.

This is a quick little story, hardly a story more than an incident, as most of the tale occurs in the past. The Soldier's determination to follow orders, no matter what, has killed Jeannie Evans, whose own contributions to the War effort had been immense. It's a bleak look at the Soldier's military strength and human weakness, at how what he became to end the War seems to erase whatever he knew of decency prior to his horrific scarring.

Posted by Chad Carter at 4:20 PM No comments: 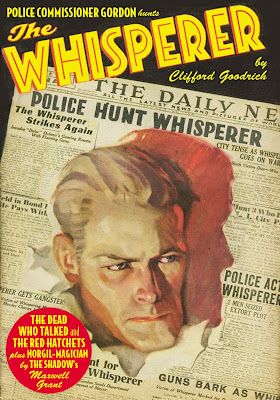 Will Murray, Pulp authority, has an interview at Comic Book Resources, discussing upcoming Pulp releases from various sources spearheaded by his efforts:


Looking forward to checking out "The Whisperer" novels!
Posted by Chad Carter at 4:12 PM No comments:

A Night. A Fight. A Friday Night. Fight! 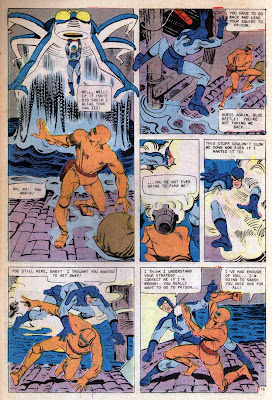 Here we learn what happens when you talk too much smack too soon!

Anyway, here's to DC Comics not killing off any more great characters, just because some pretentious writers want people to take them seriously. Please? Stop?

Posted by Chad Carter at 4:55 PM No comments:

Characters I Want to Write! THE FACE! 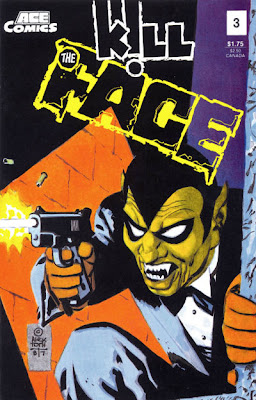 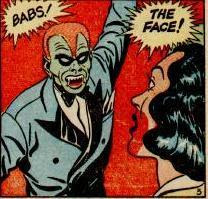 Created by artist Mart Bailey in the 1940s, The Face is one of those time-and-place concepts that gets snickered at by the modern reader. 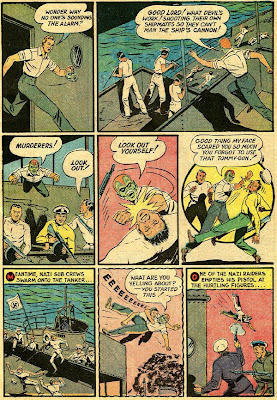 A reporter-type guy named Tony Trent puts on a scary rubber mask, a visage so terrifying that criminals sh*t their pants instead of shooting Trent in the Face. This hesitation on their part leads to Trent, as The Face, cleaning their clock for them.

The original series of stories are actually really well-done, art-wise. Bailey had that clean, smooth 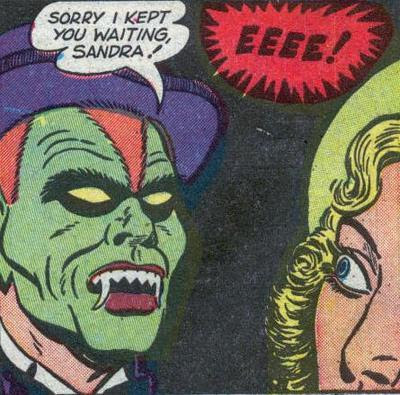 style we associate with Wally Wood or Al Williamson. Of the stories I've seen, most have been highly entertaining pieces. 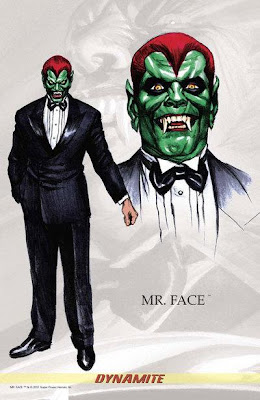 The Face, as an intellectual property, has fallen into the Public Domain. Thus, anyone can create stories based on the original version of The Face, created in the 1940s. And recently, Alex Ross and the Dynamite Comics machine has seen fit to reinterpret the character for their PROJECT SUPERPOWERS series. Unlike the original (which no one is bound to...only Alex Ross' version of The Face will be protected by his copyright,) Ross' Face has a supernatural ability to illicit terrifying hallucinations when criminals stare into his kisser.


Eh. Whatever. I mean, it would explain why The Face was so terrifying in the first place, but 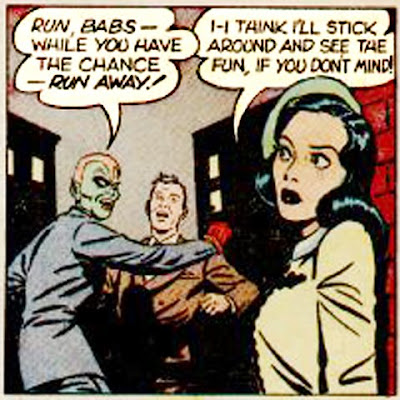 really I don't care much for the whole of PROJECT SUPERPOWERS so...I disparage it. 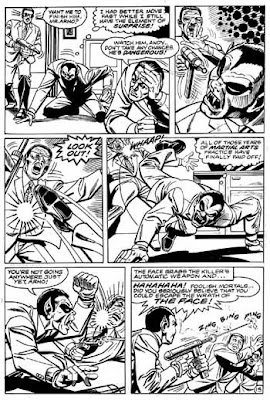 My version of The Face, I've been thinking, would have a great secret about him, something he keeps hidden. I've wondered about the whole idea behind Tony Trent in relation to other heroes who illicit revulsion, like The Creeper and The Question (both Steve Ditko creations, and Ditko himself has worked on The Face, illustrated here,) and Trent psychologically destroys his prey. I wonder what would happen if Trent's real face began to destroy his Face persona. What if Tony Trent was the thing that scared The Face most in the world? 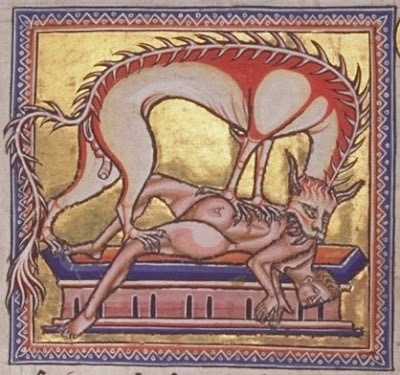 Literalizing this would require some Pulp intervention, particularly in regards to something called "the Bultugin." This is a word in parts of Africa which supposedly means, "I change into a hyena." Literally. The idea of the were-hyena is actually a strong legend in Africa, a boogeyman who haunts many nights there. I keep looking at The Face and connecting "Bultugin" to it. I find there's something there...something relevant and terrifying. 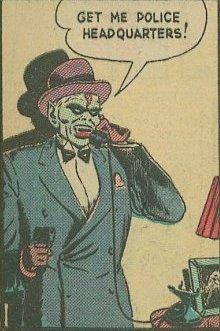 All in all, I'd feel like a crumb "taking" The Face and altering Mart Bailey's creation to suit my desires...at the same time, the character is compelling and visually striking, and it's unfortunate to see The Face unused, unappreciated, by a modern audience.

Posted by Chad Carter at 7:24 PM No comments:

Labels: characters I want to write, the face

Friday Night Fights! The FINAL O.P.P.! Daredevil Has Four Ways to Take You OUT! 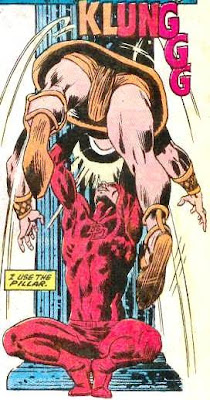 And it looks like the pillar was the most fun one!


Because in Frank Miller's DAREDEVIL 226 with the great Dave Mazzuchelli on art, Daredevil will actually consider all the ways he can take you. You know you're badass when you have time to ruminate on how to take out a dangerous psychotic hand-to-hand.

http://www.spacebooger.com/ similarly anticipates your moves for his pleasure.
Posted by Chad Carter at 7:37 PM No comments: 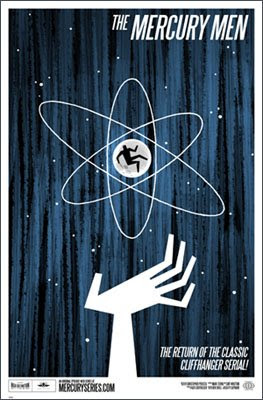 
Check out this gnarly new trailer for a fabulous Pulp experience!
Posted by Chad Carter at 7:45 PM 2 comments: 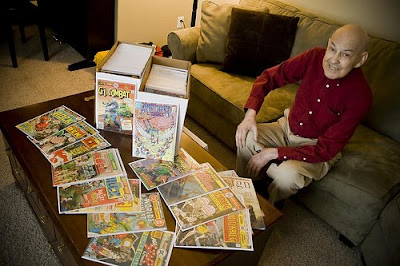 Photo courtesy of http://ninjasandballroomdance.blogspot.com/2009/01/photos-with-ric-estrada-comic-artist.html
I hate losing a solid professional comic book artist. They're an extinct beast in current society as it is, but at least you know they're still out there, still as talented as they ever were. Hoping, waiting, someday some comic book publisher will look around and say, "Man, Ric Estrada is still alive and ready to work. Sal Buscema, too. George Tuska. Nobody is using them and paying them what they're worth. That's what we'll do: bring back solid professional comics by solid professionals!"
Well, in this case, it's too late. Ric Estrada leaves behind a legacy of great work and assuredly a lot of family and friends who loved him. RIP.
Posted by Chad Carter at 10:10 AM No comments: 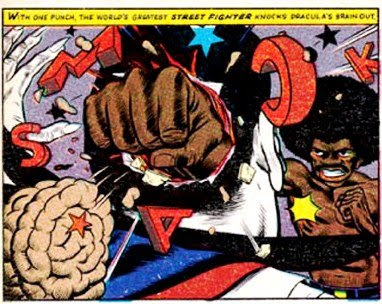 From Jim Rugg's "Dracula Vs Afrodisiac", which is the smooth story of Street Superhero and vainglorious pimp Afrodisiac's battle against the Evil of Dracula, which results in perhaps the only recorded appearance of Dracula's entire brain. Who knew?
Read the whole goddamn awesome story here http://nymag.com/daily/entertainment/2008/06/comics_meat3.html
http://www.spacebooger.com/ usually keeps his bi*tches in line. See his pimp hand and tremble.
Posted by Chad Carter at 10:19 AM No comments: