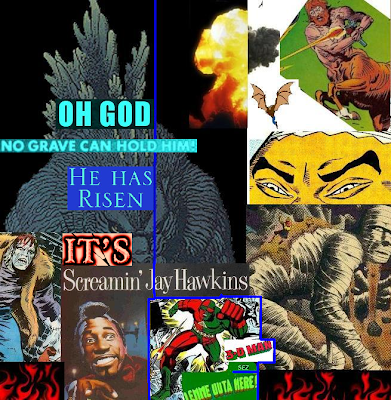 Posted by Chad Carter at 7:19 AM No comments: 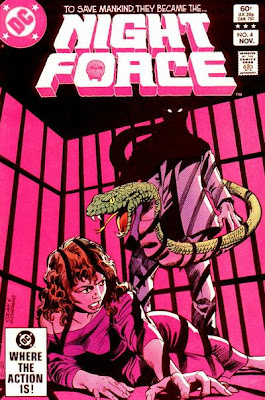 The above cover is by one of the true geniuses of classic comics, Gene Colan.
His approach to light and dark was intense and violent, and every line seems to contort from the power of his pencils.
The "Dean" made his legend on one of the best comic series of the 1970s, and all time, TOMB OF DRACULA with writer Marv Wolfman and inker Tom Palmer.
Colan's still around today, despite recent health problems, and he has continued to do commission work and appear at Conventions.
For a man who's been working in comics since the 1950s, that's pretty astounding.
For the record, Gene Colan is a priceless talent who produced roughly half of the best comics I've ever read. I'll die with his images in my head. I guess...that's kind of a compliment, right?
Posted by Chad Carter at 4:50 PM No comments: 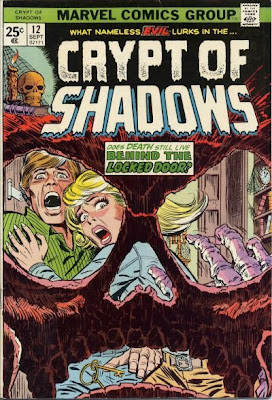 Little confusion on who the artists are, but the Grand Comics Database says Ron Wilson and inker Mike Eposito, around 1974.
Wicked, wicked cool, eh?
Posted by Chad Carter at 7:37 PM No comments: 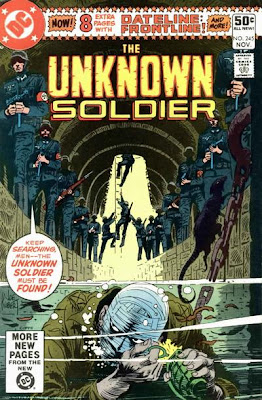 All covers done by the greatest cover artist of all time, Joe Kubert.

Created in 1966 by Bob Kanigher and Joe Kubert, two greats of DC Comics, the Unknown Soldier is just that: a faceless soldier who uses make-up and masks to infiltrate the enemy and destroy them from within. He has no name, and his face is blown to smithereens by a grenade in the early part of World War II, prior to Pearl Harbor. Said grenade killed his brother, who was in the foxhole with him. The U.S. Army tries to put the guy's face back together, but he's horrifically scarred. With nothing else left to this man, he's offered an opportunity to become an agent of espionage to help the War effort. The Soldier agrees, becoming a master of commando fighting, subterfuge, demolition, and disguise.


From about 1942 until the end of the European campaign, the Soldier is sent on numerous missions, performing duties no other soldier can pull off. I'll be covering quite possibly the greatest run of war comics ever produced in future installments of Pulp Hero, STAR-SPANGLED WAR STORIES 183-203, published in the mid-1970s. 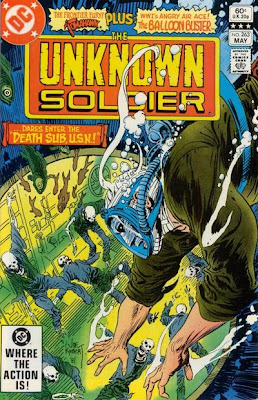 The Unknown Soldier's identity remains secret for the entirety of his lengthly comic book life, culminating in the Soldier's final issue where he kills Hitler before Hitler can unleash a Doomsday Device of unborn Nosferatu to destroy the Allies. That's right, vampires. A crazy end befitting the man with no face, who is then killed saving a small child from a tank barrage.


The Soldier's story, like many good characters, doesn't end there, as he's been brought back a couple of times in limited fashion, nothing substantial. Recently, I picked up the new UNKNOWNSOLDIER comic by Joshua Dysart and Alberto Ponticelli, which suggests the Soldier might be an unkillable entity moving from one killing field to another throughout history. It's a supposition only, but interesting. 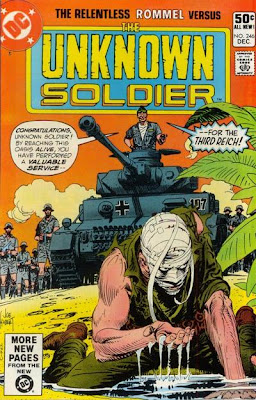 The Unknown Soldier is a tragic figure, a man who is human and yet every action, as well as the nature of his physical deformity and almost superhuman abilities, are those of a killing machine. He exists to do what the American Government, and certainly the consciousness of America, cannot abide. He does this gladly, as a Soldier, understanding there is no retirement, no peaceful death, no escape from the screaming ghosts of enemies and victims alike. War never truly ends for anyone who experiences it...for the Soldier, he only exists because of it. And thus, the faceless man becomes the Face of War.

Posted by Chad Carter at 6:07 PM No comments: 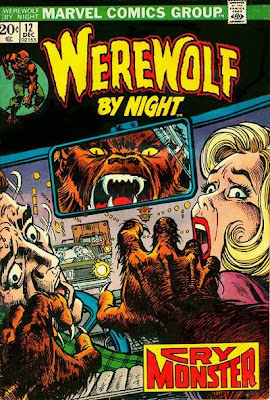 Myself, I've always been partial to the "Wolf Man" icon of the Horror Greats.

Erroneously labeled "Werewolf" in this series from 1970's Marvel Comics, the character above is a Wolf Man through and through.

For starters, it should be stated "Lycanthropy" or "moon madness" is a verifiable psychological illness in the "real" world. They ain't called "lunatics" for nothing, folks. "Lycanthropy" usually means someone who believes they turn into a raging beast when the moon is full. The word encompasses fiction's bastardization of the premise over the years.

A "werewolf" is an "Old World" legend concerning men who make deals with the Devil, usually involving selling their souls for a belt of wolf-fur that, when worn, turns them into great, big slavering wolves. No "man" involved post-transformation, just a wolf, usually larger than most, which feasts on human flesh. An odd by-product of this supernatural transformation is the discarded clothes of the practitioner, which turn to stone until he removes the belt (or whatever item given him by Satan) and becomes a man again.

The "Wolf Man" however, is purely a film creation.

Lon Chaney Jr. played the iconic Wolf Man in the 1945 movie of the same name. There was another before that, in 1935, again "wrongly" titled WEREWOLF OF LONDON with Henry Hull suffering the curse of the beast and Warner Oland (the first Charlie Chan) the film's villain. WEREWOLF OF LONDON is a great movie, and Hull's Wolf Man, unlike Chaney Jr's more fuzzy-wuzzy version (okay, I just dissed Hall of Fame make-up artist Jack Pierce, but his Wolf Man is no Frankenstein Monster!) is what I call an actual Wolf Man: 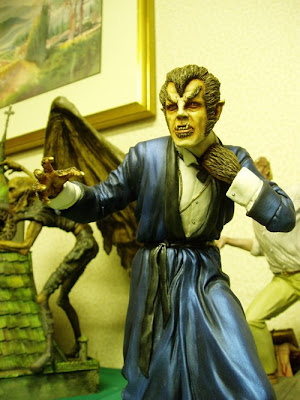 I mean, that is unbelievably badass.

Somewhere in between, and perhaps the greatest Wolf Man design of all time, is Oliver Reed in CURSE OF THE WEREWOLF (1961, Hammer Studios): 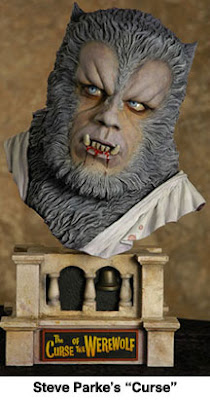 to see a bunch more sweet sculptures of horror icons!)

Pretty much the opening credits of CURSE do one thing better than any movie I've seen with a Wolf Man character...the opening shows a band of light across a set of yellow eyes--the eyes of Oliver Reed's Wolf Man--and over a period of a minute or so while the credits play, Reed's eyes begin to well up and tears stream down his face.

Now, I know this was because the colored contacts used in the 1960s were akin to pressing painted sandpaper on top of your eyeballs (according to Christopher Lee, who ran around in them as Dracula for most of the 1960s and early 1970s), so Reed "weeping" is eye irritation.

But in the context of the movie, of the Wolf Man as a victim himself, it's a beautiful (dare-I-pretense-it) metaphor for the tragedy.


Because a Wolf Man is, as the great screenwriter Curt Siodmak penned it (in a famous poem written specifically for THE WOLF MAN):


The tragedy of the Wolf Man is that he's usually a poor schlub like you or me, bopping along trying to date pretty girls, have a strawberry shake and catch the late show, when he's attacked by a "wolf-like creature" and injured, specifically bitten.


From that moment on, the schlub "dies" and is cursed to be immortal. Not a bad deal, except he becomes a Wolf Man during the full moon each month and tries to tear his loved ones to pieces. In fact, his loved ones are most likely to be his victims, as the "man" part will seek out those familiar to him, longing for help and understanding...and it is the beast, lusting for blood, who kills them.


I think this is why I always loved the Wolf Man more than Frankenstein's Monster or the Invisible Man or the Gill-Man...the Wolf Man cannot control his fury. He has to kill everything in his path. Other classic Horror Monsters make conscious decisions concerning their fate, but the Wolf Man has no choice. His animal instinct is to hunt and kill, merciless as nature.


To awaken from a dream of blood, as the Man must do once the beast recedes, is to awaken to a nightmare of what he has done. At the core of the Wolf Man's tragedy is this horror, the kind of horror none of us would want to bear, and that is why the Wolf Man is truly unique among his peers.

Posted by Chad Carter at 6:41 PM No comments: 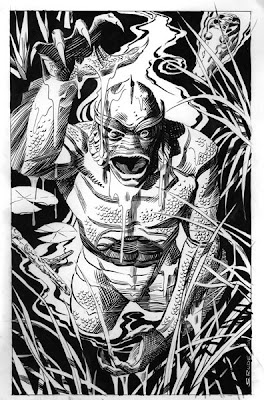 The Halloween image of the day, leading up to the big night itself. Steve Rude http://www.rudedudeproductions.com/ is an extraordinary talent in sequential art and painting, known by most everyone who loves the comics. His character "The Moth" will be getting some special silky smooth attention on this here blog.

What we have here is one of the icons of the Universal Horror Monsters, from THE CREATURE FROM THE BLACK LAGOON. Known as "Gill-Man" by afficionados, the original design of the Creature sprang from Millicent Patrick's classy-dame fingertips, ripped off here from IMDB.com: 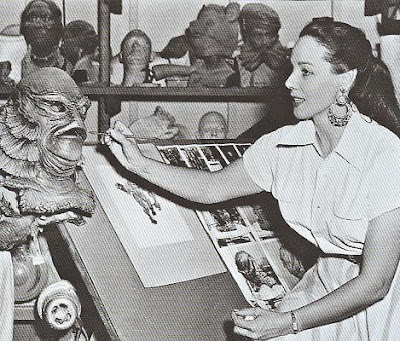 Anyway, Steve Rude's rendition is pretty awesome, you have to admit.

Posted by Chad Carter at 4:35 PM No comments: 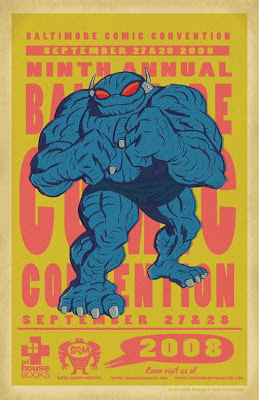 Met the man behind this gnarly new character Super Robot Monster, had to buy his "fight poster" promoting his website and the potential coolness to be dropped into our collective pants.

The man's name is Paul Conrad, out of Nashville, and he deserves mucho loveo for what I hope will eventually be a published Super Robot Monster adventure, coming soon. 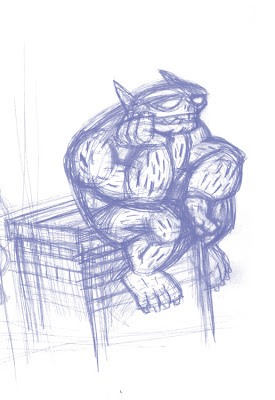 Posted by Chad Carter at 1:46 PM No comments:

The 3D Man sez: "GHOST ZERO is better than sex on a waxed surf board with a giant squid, Ava Gardner and Screamin' Jay Hawkins!!!" 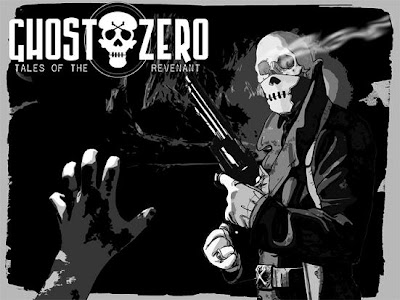 Dave Flora is the creator of this great character design, and conceit, and his art is also amazing. There's pretty much nothing Flora doesn't excell at where it concerns his one true love, originally known as the Revenant, now Ghost Zero.

Dig this: a kid finds a ring containing the vengeful ghost of a Pulp destroyer-of-evil. The kid accepts being the "host" for this destroyer, and when confronted with evil, the kid is possessed by the Revenant, who unleashes all kinds of hell on the hell-bound.

And that doesn't even begin to illustrate how cool Ghost Zero actually is.

We're all going to get our chance, though, as GHOST ZERO is now officially with the publisher Moonstone Books, and in the back of their (ending) PHANTOM series upcoming, will be a GHOST ZERO short story. Also, when the new SPIDER books are released, you'll be getting a regular dose of this series.

Bonus image from the great Francesco Francavilla and Pulp Sunday! 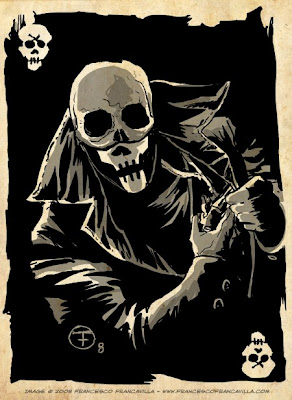 Please go to http://ghostzero.com/ and support this stuff, because it is the future! 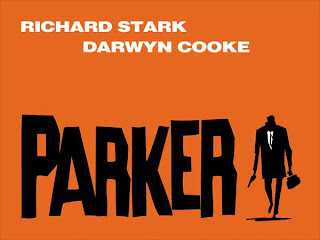 This is "old" news in the Internet culture, but I want to promote this as hard as possible until it melts in my hands.
http://www.newsarama.com/comics/080723-comic-con-cooke-parker.html
Posted by Chad Carter at 3:09 PM No comments: