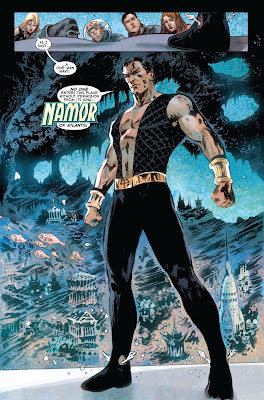 Short and sweet: AGENTS OF ATLAS is one of those comics you folks must support.

Especially now, because there's a "new" artist doing the book, named Gabriel Hardman, who is fast becoming one of my favorites. Kudos to whoever at Marvel for realizing this guy is the artist for this comic book about heroes from the 1950s. Hardman ain't too shabby on heroes from the 1940s either, as evidenced by his Sub-Mariner stage left.
The other major reason, among many, is not only the writing of Jeff Parker, who is the best comic book superhero writer right now, period, but the Agents themselves. An immortal talking gorilla, a super-strong Atlantean chick, a literal god, a secret agent, a Uranian, and a 1950s robot with a death ray...I just don't know what else you could need/want from a superhero comic book. Even while weighted down with the latest crossover at Marvel ("Dark Reign"...whatever) the book still managed to be readable. That in itself is almost unheard of.
Please do yourself a favor and pick up AGENTS OF ATLAS, which is a monthly ongoing. We may not see its like again for some time.

I've been out of the comics scene pretty much since the days that Image & Co. made it nigh impossible to follow a title without taking out a loan from the bank.

I've picked up a title here and there. I managed to compile some Agents of Atlas .cbrs, and I thought the title was done, but apparently not. I'm heading to the comics shop tomorrow!