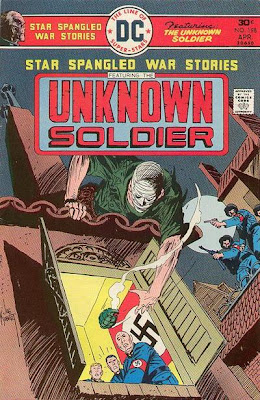 The Unknown Soldier is a prisoner awaiting trial for, you guessed it from the story title, treason.


The story opens with the Soldier being locked up, and thinking back on his mission prior to his traitorous acts. Hours before, the Soldier had been receiving orders from Marshall Letain, an officer of the Allies in charge of the French Front. The Allies' "Operation Anvil" is ramming the Nazis back toward Paris, but the Axis has plans to counter-attack with a new weapon "said to make standard explosives obsolete." However, no one knows exactly what the weapon is, but it's the Soldier's job to find it and destroy it.


The Soldier parachutes into a small Occupied French town called Avignon, where he uses his make-up affects to become a standard peasant. He locates the munitions factory, but hasn't a clue how to get inside. At that moment, while having a beer in a watering hole listening in to a clutch of Nazi guards off-duty, the Soldier sees his opportunity in the form of a Sgt. Schepke, a sad, plodding little guard whom the others mock. Sgt. Schepke nervously gobbles one of his chocolate bars, leaving the derisive laughter of the other guards. Schepke runs into a Frenchman named Georges, who is Schepke's friend. The two discuss Schepke's helpless indulgence of the other men's cruelty, and Schepke admits he is a career soldier with nothing else to endeavor for. Georges is a widower and a toy-maker, whose only joy is in the faces of happy children in his shop. The Frenchman and the German are fast friends because of their mutual powerlessness against the external forces battering them.


When Georges returns home, he is greeted by a pistol pressed to his temple. The Soldier shackles Georges hands and hangs the man from his wrists, to keep him from touching the floor while the Soldier fashions a mask of Georges' face. Now "Georges," the Soldier departs, leaving the real Georges to attempt his escape. Georges knows the Soldier is a spy, and fears he will harm Schepke. Valiantly, Georges struggles to slide his shackles along the length of the wooden bar he is suspended by. But when he drops, he is impaled by one of his own toy-carving knives.


The other Georges, meanwhile, goes to Schepke while he's on guard duty and asks if he might have an escort about the munitions factory. Though forbidden, Schepke agrees to show his friend what he can.

The two men watch, hidden, during a test of the new weapon the Soldier is searching for. In a field are a herd of sheep. From the ground rise small extended mechanisms all around the sheep. In less than a minute, all of the animals convulse and immediately die. Schepke points out to Georges that the new weapon is "shell(s that) don't explode--they emit sounds waves that disrupt the nervous system, bringing death in seconds!"


During the test, Schepke had been eating one of his candy bars, and dropped the wrapper. Later, Nazi guards discover the wrapper, leading the Commandant to the identity of the watcher. Schepke is confronted and tries to deny it, but the Commandant uncovers the sheeted corpse of the real Georges. Schepke must reveal what he knows of the espionage agent who has impersonated Georges.

The Georges double, unknowing, breaks into the munitions offices, to steal the "sonic shell" plans. He even finds a "wave transmitter", a small box-like device, which he takes for the Allied scientists to study. The Soldier sneaks out of the town, making his way back across Allied lines. However, the Soldier's journey is intercut with the Nazi Commandant at a radar console, watching his progress. At Allied H.Q., the Soldier and Marshall Letain enter a scientific lab, where a Dr. Forster is busy analyzing the wave transmitter in hopes of designing a jamming signal for the weapons. Too late, Dr. Forster realizes the device isn't a transmitter, but a bomb, which is detonated by the Nazis.


The Soldier is farthest from Letain and Forster, who are both killed. The Soldier has been set up, and he is presented as a double agent having succeeded in murdering an important stradegist. Back in the present, the Allied guards have returned to haul the Soldier before a court martial, but they find an empty cell. Also, the Soldier has retrieved his make-up kit. Orders are issued by Allied command that the Soldier be apprehended, "dead or alive!"


More of the usual excellence from David Michelinie and Gerry Talaoc, as this is Part One of yet another multi-part story, which Michelinie is doing more and more by this point in the run. I don't think at any other point in the Unknown Soldier's original stories were there any multi-part stories. Mostly in keeping with the War Comic traditions of one-and-dones, but Michelinie kinks the formula to produce some of the best war stories of the era.