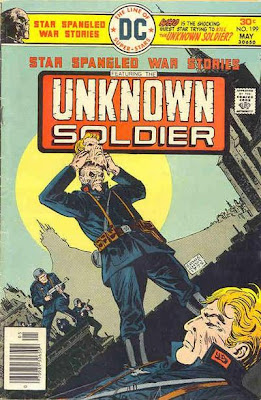 
Disguised as the unfortunate Georges Ronsard in Avignon, the Soldier is immediately spotted by the Nazis, confirming he was, indeed, set up for the murders at Allied HQ. After a quick getaway, the scene switches to the hidden-behind-a-waterfall HQ of one of the famous French rebel fighters, Mlle. Marie and her men. Intelligence reports the Soldier must be found and stopped, and Mlle. Marie is hot to kill any traitors to France. She's on the hunt.


Meanwhile, the Soldier kills a Nazi in an alley, a Leutnant Holbach, and "steals his face."

At the moment, Sgt. Schepke reports to his superior, who informs Schepke he is being dishonorably discharged for his incompetence. Schepke begs for his position, but the Colonel has no choice. Schepke leaves, weeping and eating a candy bar.


The false Lt. Holbach arrives, seeking Schepke, and freely searches the munitions factory. As he's passing a mop-woman, Holbach is struck from behind by the mop. The attacker is Mlle. Marie herself, along with her Maquis fighters. Revealing she deduced the Soldier's identity by the fact that his mask does not sweat in the factory heat. Before Marie can kill him, the Soldier breaks free and begins fighting the Maquis hand to hand, as gunfire will alert the Nazis all around them.


Simultaneously, Sgt. Schepke is in his quarters, cleaning himself up, regretting his sad existence. He puts on his best uniform, contemplatively.


The Soldier stems the tide of battle by convincing Mlle. Marie that he was set-up, though she remains highly skeptical. The Soldier assures her he can produce "the man who did it." As Holbach, the Soldier leads Marie and her fighters to Sgt. Schepke's quarters just as a shot rings out. The Soldier breaks in to find Sgt. Schepke, and his alibi, dead. Mlle. Marie draws a bead on the Soldier with her machine gun, to dispense justice.


Things just seem to be getting worse for the Soldier, as this is the end of Part Two. The inclusion of Mlle. Marie is a nice touch, as she's a recognizable historic figure within the DC Comics universe, created in 1959 by Robert Kanigher and Jerry Grandenetti http://www.toonopedia.com/mllemari.htm.


David Michelinie and Gerry Talaoc produce another solid winner here...the worst that can be said is that most of these stories are too short. At the time, and for whatever reason, the War Comics had back-up stories, usually of far inferior quality. On some of these back-ups you'll recognize some future stars of comics, like Frank Miller for instance. In general, the back-up stories tend to prevent us from getting even more Unknown Soldier story, which is a shame.